The customer is Kintetsu Railway, whose electrified trains operate on 500 km (311 miles) of track.

Many of those tracks pass through tunnels which can hamper rescue efforts if there is a power outage. The Tesla batteries can provide enough electricity for stranded trains to operate for up to 30 minutes — enough for them to exit those tunnels and perhaps reach the nearest station, according to ArsTechnica.

The batteries may also help the railway to save money by storing energy when it is plentiful and providing it back to the system during times of peak demand when prices are higher. The system is expected to be activated on April 1. 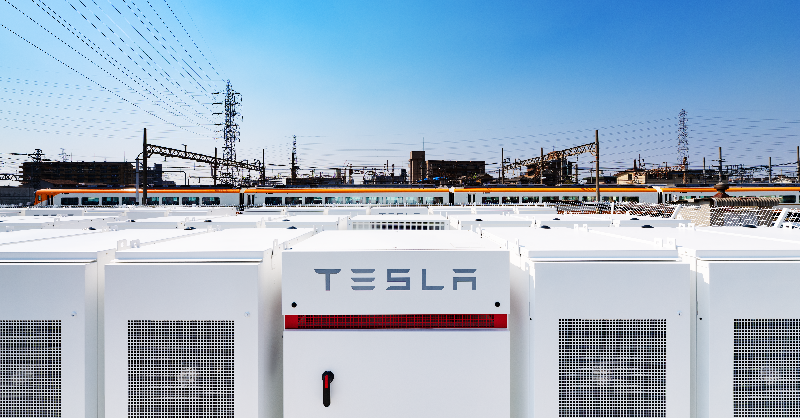 During the recent Model Y reveal, Elon Musk told his audience, “This is the year of the solar roof and Powerwall. Batteries were at a premium in 2018 because all resources had to be reallocated to Model 3 production — otherwise, we were going to die,” he said. “But now that Model 3 production is going well, we’re excited about the solar roof, solar retrofit, and Powerwall.”

According to Greentech Media, Tesla deployed a total of 1.04 gigawatt-hours of energy storage in 2018, triple the amount installed in 2017. In its year-end 2018 letter to investors, Tesla claimed “a better supply of cells and new manufacturing equipment” will allow it to install “over 2 gigawatt-hours in 2019.” Best of all, the profitability of its energy storage business is increasing as well. “It’s clear that there is a huge opportunity for us in large-scale energy storage,” Musk said recently.

While  reactionaries continue bleating about how expensive battery storage is, the truth is that costs are plummeting. Most of those naysayers are paid agents of the natural gas industry, which is quaking in its boots as it realizes it is on the verge of becoming irrelevant.

A report by Bloomberg New Energy Finance dated March 27 says, “the benchmark levelized cost of electricity for lithium-ion batteries has fallen 35% to $187 per megawatt-hour since the first half of 2018.” BNEF analyst Elena Giannakopoulou adds this insight: “Looking back over this decade, there have been staggering improvements in the cost-competitiveness of these low-carbon options, thanks to technology innovation, economies of scale, stiff price competition and manufacturing experience.”

Last year, Elon Musk told investors Tesla is capable of building batteries at the cell level for $100 per kilowatt hour and will soon be able to build battery packs at the $100 per kilowatt-hour level as well. “The rate of stationary storage is going to grow exponentially. For many years to come, each incremental year will be about as much as all of the preceding years,” he said.

Just as it is driving structural changes in auto manufacturing, Tesla is also pushing mainstream actors in the electrical generation and distribution field to change their perceptions away from a “business as usual” mindset to one that incorporates more low and zero emissions solutions. Flowery speeches don’t affect change in the world of commerce but low prices certainly do.